I grew up in a working class family. I went down to the shipyards as a young 16 year old to serve my time as a Marine Fitter. After 15 years, including my apprenticeship, I moved into the Shipbuilding offices and trained as a Planning Engineer. After three years doing this job I made my way into the big wide world and became a travelling Contractor. I worked in many places in the UK, Europe and the Far East. I am currently still working as a Planning Engineer thirty three years later. I have a wonderful wife who cares for me and three lovely daughters. I am a proud Granddad with five grandchildren who wrap me around their fingers.

This book sums up me up I think , it has lots of humorous poems .Lots of poems have been developed from jokes that I knew back in my young days. There are views on Life in the present day and from the past, Romantic ones wrote from the heart. I write when I’m inspired, sadly I have misplaced quite a few of the poems that I have written over the years and although I have tried to recreate some again they never seem to have the same feeling. The book is there to be enjoyed, easy reading and a few laughs

My Writing, My Novel

I think, like a lot of people, I always thought that I would love to write a novel. It eventually happened, although I did wait until I was in my fifties to make it happen. I don't know where I got the idea from to write a Fictional Story based on Historic events, it just seemed to pop into my head. It took a little bit of research but that wasn't a problem as you might expect the World Wide Web is full of information about the Ripper. The story grew as I got more into the plot, I used to dictate the story in my head when driving or travelling on public transport. The funniest thing was that I actually thought the ending two thirds into writing the novel and had the final chapter written early. I was always desperate to get to a PC and type in my commuting thoughts, it led to a lot of Proofreading and a great many punctuation errors, but I did not mind this one bit as long as I got my thoughts down on paper or in this case my PC Word Document
I suppose the inspiration to write my novel came from the publication of my poetry book, after years of writing the odd poem here and there and losing some in the process, I decided to self-publish. It was a great feeling seeing my poetry book on the Amazon Website. The feeling grew when the novel appeared about 20 months later. I cannot express enough my gratitude for all the help I have received in the publishing of my book from my publisher, from the very first consultation to the finished article the team have constantly kept me up to date on the progress and have been extremely helpful and quick to respond to my many questions with a very professional and friendly approach. 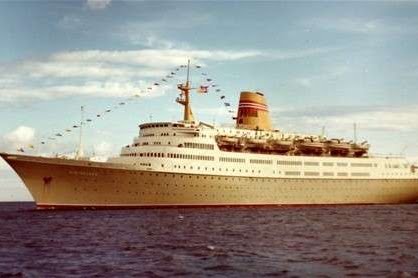 This was the first Ship i worked on as a young apprentice down the shipyards, it set sail from the Neptune Yard on the River Tyne in 1973 , I worked in the Engine Room was a Marine fitter working on the installation of the Main Engine and Auxillary equipment .
In 1983 she was sold to Cunard Line, retaining her original name until 1999 when she was renamed Caronia. In 2004 she was sold to Saga and sailed as Saga Ruby
She sailed her final world cruise in the first months of 2013. However it was marred by technical difficulties which kept the ship in Southampton until late February, which led to the cruise being renamed the 'Grand Voyage' visiting South America and South Africa.
In 2014 she was sold for use as a floating hotel and renamed Oasia.